Yes, She is like me. The book is the collection of her daily journal entries. Mostly her funny moments with the family including her mother, son (called her Prodigal son in book), daughter (baby), husband (Man of the house) and servant (desi Jeeves).

Unfortunately, I have read “Legend of Laxmi Prasad” before this book, which is not as good as this one. She writes non fiction better than fiction, it’s understandable as it is hard to write about the things which is not relevant to you.

There are few incidences mentioned in the book that I can relate with, like I also found Karva Chauth most overrated festival and a bit filmy, I also don’t believe in magical black thread, magical godmen, don’t think much about dresses while going out etc etc.

She is good with sarcasm. It is a fun book and good for light reading.

1. There are 146 countries above us where the men have longer lifespans, and the biggest blow is that even with four wives who don’t fast for them, the Arab men outlive our good old Indian dudes.
2. A wise woman keeps her hands firmly in her pockets and does not accidentally unzip anything, including her mouth.
3. I misfit here, like most women that enter families which are so different from theirs.
4. Our little satellite reached Mars because it was called MOM. If it was called DAD, it would still be circling the Earth, lost, but not willing to ask for directions.
5. Life is full of contradictions. We crave security and independence in equal measures. 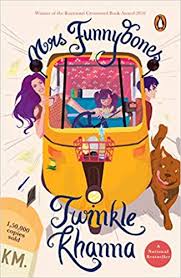